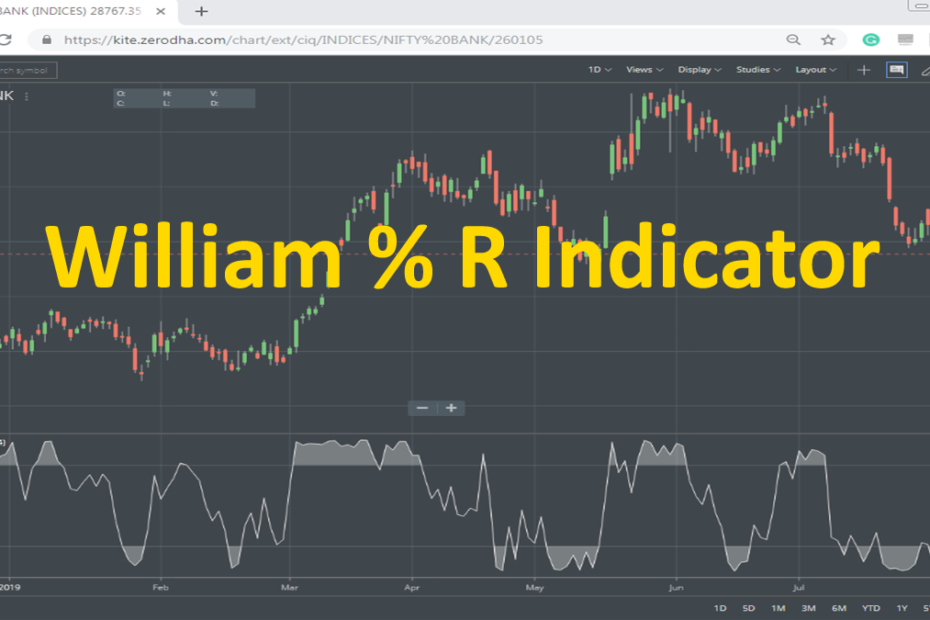 What is William Percent R Indicator?

Williams percent R indicator was developed by Larry Williams. This indicator is providing insight into the weakness or strength of a stock. Williams %R Indicator is used in various capacities including overbought or oversold levels.

If the traders are want to get more details regarding the Williams percent R indicator, then please open the STUDIES section of Zerodha Kite. The traders are also visiting this indicator in Kite mobile App. The Period is 14 and if you want to change the value of Period then you can change it. The traders can also check to attach process of the Williams %R indicator to Reliance Industries shares price chart. This indicator is available includes daily, weekly, monthly or intraday.

Highest High = This is the highest price over the lookback period.

Lowest Low = This is the lowest price over the lookback period.

The final calculation of %R is multiplied by -100 correct the inversion and move the decimal.

Williams %R indicator makes it easy to identify overbought and oversold levels. The oscillator ranges from 0 to -100. Williams percent R indicator will always fluctuate within this range.

In this indicator, traditional settings use -20 as the overbought threshold and -80 as the oversold threshold. When the readings are above -20 for the 14-day then the Williams %R indicator would indicate that the underlying security was trading near the top of its 14-day high-low range. Although the readings below -80 occur when a security is trading at the low end of its high-low range.

In this indicator, generally, overbought readings are not necessarily bearish before looking at some chart examples. Securities of Williams percent R indicator can become overbought and remain overbought during a strong uptrend. Closing levels that are consistently near the top of the range indicate sustained buying pressure of this indicator.

In the same way, oversold readings are not necessarily bullish. Securities of the Williams %R indicator can also become oversold and remain oversold during a strong downtrend. Closing levels consistently near the bottom of the range indicate sustained selling pressure of this indicator.

How this indicator works :

Pros and Cons of the Indicator

Nifty moved more than 70 points. Similarly on 09.06.17. in the same hourly chart, Williams %R touched -20 percent and started coming down long before price moved with a gap down candle.

Williams percent R strategy if combined with another indicator like MACD (to ascertain price movement) becomes a strong tool and a trader can benefit immensely from this fantastic combination if used judiciously. Check how to use Williams Percent R in a trading system in Aibroker: Designing A Trading System On Amibroker Like Big Trends Toolkit.