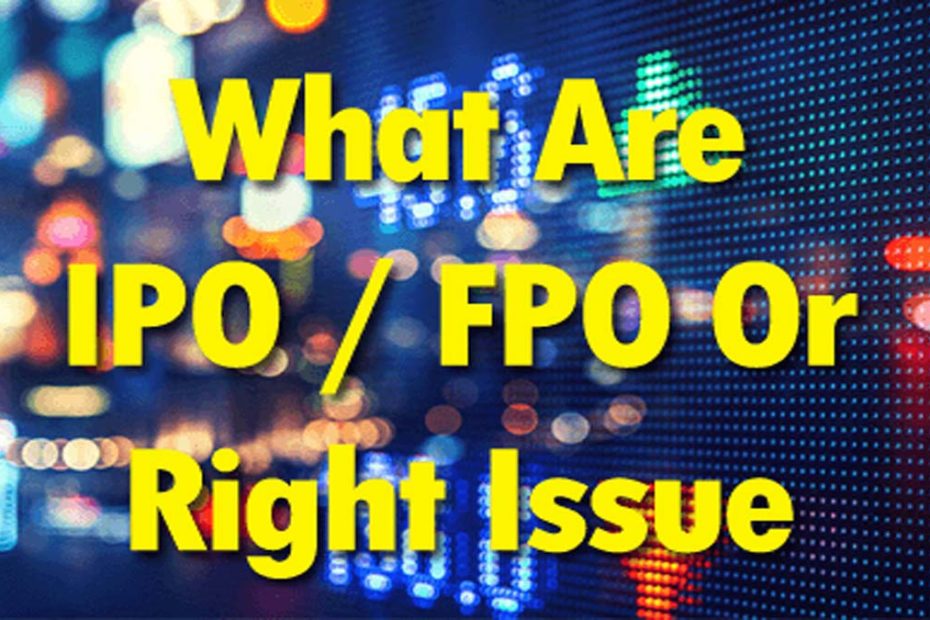 In our site, we have already discussed IPO or initial public offering in details. We also have a very popular section on our site for upcoming IPO reviews. In this article, we will discuss different types of share issue like IPO FPO Right Issue and Preferential Issue and we will see what are the differences between them.

Whenever a company wants to raise money from the market for the first time, they can do so by IPO. When a company starts its operation, it is started on own money or they take a loan from the banks or some outside investor invests in the same, who has an idea that the company can grow in future. But as and when a company grows they need to come up with IPO to raise money from the market because they want to reduce the bank loans or the initial investor may want an exit.

The investor has invested at a time when the company was very small and no one had faith in it. But now the company has created a base and some future is now visible with the initial investment. So the investor may want to book profits and take back his share. Now retain investors may also become interested in the company because its future prospects are visible now. Now the company can approach the retail investors with their future prospects and ask for investment from them. This is called an initial public offering or IPO. So we understand the meaning of the first term in our discussion of IPO FPO Right Issue and Preferential Issue.

A company comes up with an IPO for various reasons. The initial investor or promoter can withdraw a part of their capital. The company can repay or pre-pay bank loans. Or the company needs more money for its expansion. So whenever a company wants to come up with an IPO, they have to take the permission of the regulator called SEBI. SEBI performs an investigation on the company’s business and operations and checks if the company has fulfilled all the norms and approves the IPO accordingly. A company is approved by SEBI to come up with an IPO, does not mean that SEBI is recommending the issue. It only means that the company has fulfilled all the norms.

Sometimes IPOs are in fixed-price type and sometimes a price band is given. Now how can you apply to an issue? Nowadays all process of applying in IPOs are online. Another thing investors must keep in mind, you are applying in an IPO, does not mean that you will get the allotment. This is because in times of oversubscription the allotment process is done by lottery. Previously till the IPO allotment is done the money used to be locked in with the merchant banker. But nowadays your money is kept in your bank only, only it is kept locked. You can not utilize that money somewhere else till the IPO allotment status is published. Now, if you don’t receive an allotment of an issue your money is immediately released from your bank. So, like previous days your money is not kept locked for 4-5 months.

There are many ways of raising money from the market. They are IPO FPO Right Issue and Preferential Issue. We have already understood what is IPO. The other form of raising money from the market is called FPO. FPO means Follow-on Public Offer. If a company’s stock is already listed on the stock market but still they need more money, they can come up with an FPO. The full form of FPO is Further Public Offer or Follow-on Public Offer. Generally, a company keeps the FPO price somewhat discounted to the current market price, so that the investors become interested in the issue.

What is the Right Issue?

What is the Preferential Issue?

The fourth way of raising money from the market is a preferential issue. Here one kind of preference is given to an investor’s group of to the promoter’s of a company to invest in convertible shares. Now the preference issues are not shares and can’t be sold right now. But after a fixed time they will be converted to equity shares and can be sold in the market. So, in this case, the preferential shares have a lock-in period.

So, friends, we have discussed what are IPO FPO Right Issue and we have also discussed what is Preferential Issue. These are ways by which companies raise money from the market for various reasons. The main similarity between all the issues is that all of them are launched in the primary market. That means these are launched out of the regular market where active trading is taking place. Once they are issued the investors can sell them in a secondary market. I hope many of your queries are answered through this post. Specially newcomers will have their ideas clear. I will love to answer your queries on IPO FPO Right Issue or on Preferential Issue in the comments section below.