Fibonacci Meaning and Usage of Fibonacci in Trading 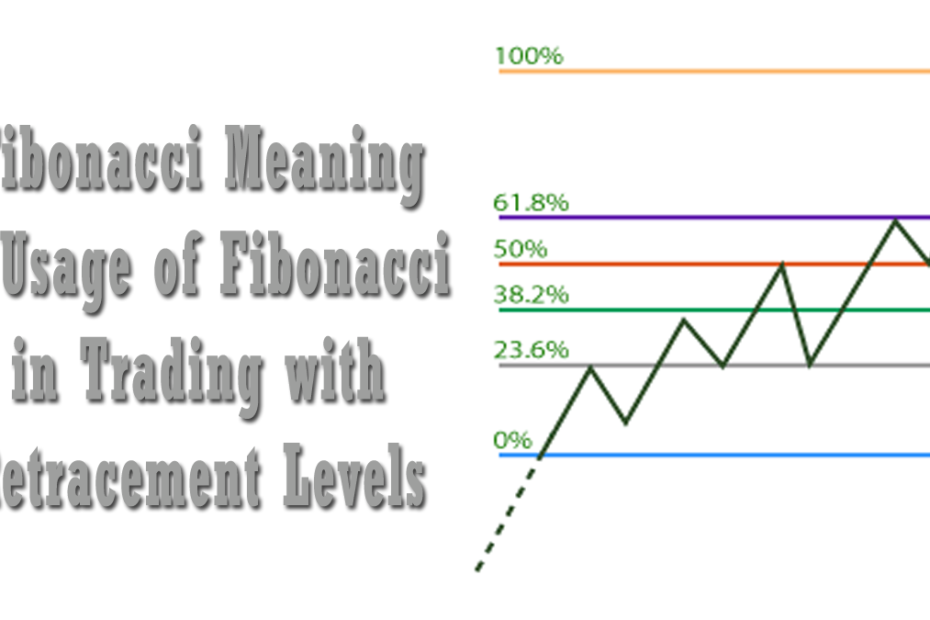 In this post, I will discuss the Fibonacci meaning and also the proper usage of Fibonacci in trading with retracement techniques. I will also see how to use it for market reversal. Using these we can beforehand calculate potential market reversal points and most of the times they are deadly accurate.

Leonardo Pisano introduced a series of inter-related numbers which starts from zero. This series includes a sequence of numbers in a specific way that the value of any number in the series is the sum of the previous two numbers.

Observe the above sequence, each number is the sum of its previous two numbers. With the progress of the sequence, a ratio is developed, refers to the golden ratio. The entire sequential ratio is described below:

We can extend the series to infinity. The Golden Fibonacci Ratio comes from the division of any number by its previous number in the series. For example:

In order to calculate the consistency of further ratio properties, a number is being divided by its immediate succeeding number and expressed in percentage.

We can find another consistency when a number is divided by a number which is two places higher. After that, it is expressed in percentage.

When a number is divided by a 3 place higher number, consistency can be seen:

How to Use Fibonacci in Trading?

What are the levels of Fibonacci in trading? It is a measure of possible movement between low and high OR high and low and we measure retracement of the prior move. You can easily create Fibonacci retracement techniques in Zerodha Kite. If you do not have an account in Zerodha CLICK HERE to get one.

First, identify a low and high in the chart using your favorite charting software. See the image below:

In Zerodha Kite click on the DRAW button and this will activate the SELECT TOOL menu in your chart.

How To Use Fibonacci in Trading with Retracement Technique for Market Reversal?

Let’s see a practical example. In 2008 Nifty made a high near 6300 and from there a major fall happened. So this became a supply zone for Nifty. So when Nifty once again moved up to that zone in 2010 Deepavali many traders sold close to that supply zone. While selling you can calculate the targets using the Fibonacci retracement techniques. Locate the last low. See the image below:

In general, 3 Fibonacci retracement levels are important. First support will come at 38.2%, second at 50% and third at 61.8%. So if selling at a supply zone OR buying at a support zone these levels can be the targets.

Now check the image above, how Nifty exactly took support at 38.2% retracement zone after correcting from the supply area.

Tools Used for Fibonacci in Trading

Fibonacci retracements are the simple and widely used Fibonacci tool. Besides identifying the support-resistance level, target and stop-loss also an important outcome from it. After applying the retracements tool, some horizontal lines appear along with the indications of the support-resistance level. The calculation is done by the first locating high-low of the chart.

More Example of Usage of Fibonacci in Trading Using Retracement

In order to clear the subject, two sets of images are attached. Observe the first image where the support-resistance level is clearly shown in the ratios of 23.6%, 50%, 38.2%. The tool carries a very simple strategy. Here, at the 23.6% level after getting a resistance, the price will go up and come back to the previous 23.6% level as a support. The retracement is clearly shown here.

For the next example, after applying the Fibonacci line on the NIFTY 50 chart, I have taken a screenshot from Zerodha Kite Web. You may see it from kite mobile app also.

As you can see in the above chart, as the price recently falls from an up-trend position, if you sell at this moment, you can take 1st support at 38.2%, 2nd support at 50% and 3rd support at the 61.8%. 50% and 61.8% are considered the most significant points. Here, one thing should be clear to you, support can works as a resistance level too during an uptrend.

Download a 36-page ebook to know more about the trade setups using the Fibonacci retracement strategy. This is taken from chapter 7 of a full ebook “Fibonacci Trading” by Carolyn Boroden. Access the download link below:

If you also want to read the full ebook you can buy the full ebook from amazon. The ebook link is given here: Fibonacci Trading: How to Master the Time and Price Advantage.

However, this overview regarding the Fibonacci Retracement Strategy will guide you to find the proper support-resistance in a stock. Also, sometimes, the calculation might get tricky to you, you may apply the Fibonacci calculator for the easy calculation method. I will love to answer your queries in the comment section below.

How to draw Fibonacci from Top to Bottom or from Bottom to Top. For how many days chart (Period).

Jitendra, at least 200-300 bars are required for a 2 wave pattern. Bottom to top OR top to bottom. So if you are trading on daily bars use a 1-2 years time period. If you are using weekly bars at least 3 years charts are necessary.

How to apply Fibonacci in intraday trading

Jalpak, in intraday charts identify a potential top or bottom. Then try to locate next potential bottom or top. You can try specific candle patterns like pin bar OR can use heikin ashi colour change. Then draw a fibonacci to locate retracement points.

thank you very much . quite informative and understandable