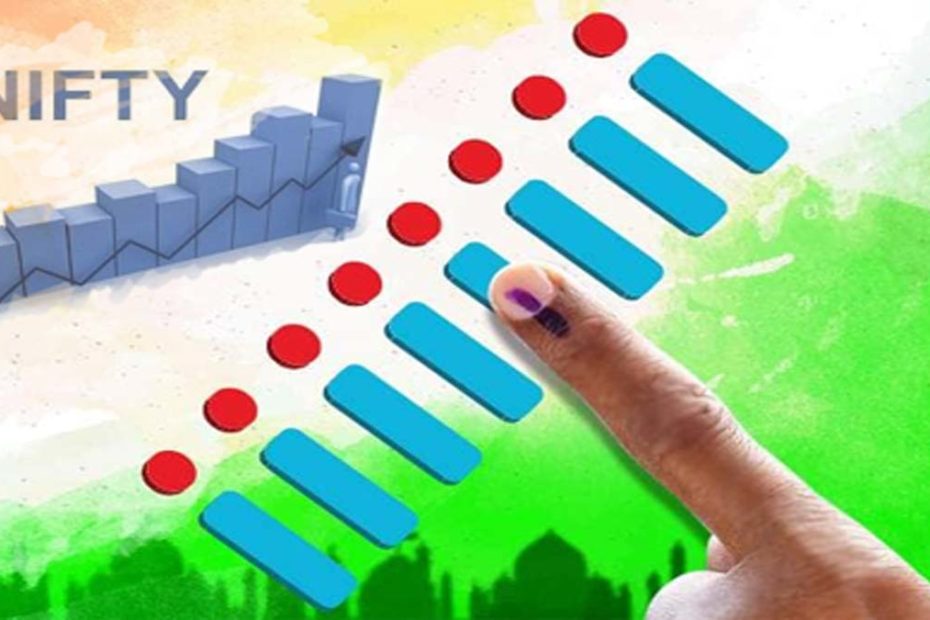 So the Loksabha election result of India for the year 2019 will be declared next week. We all know that results will be out on 23rd May. The last phase of election is going to be held tomorrow, i.e, 19th May and the exit polls will be out on Sunday, i.e, 20th May. So let me check the historical data of the Indian stock market during election years.

Now let us check the overall stock market performence before election result in 1999. Check the Nifty daily chart below of 1999.

This year we had big talks on India Shining. It was predicted that Shri Vajpayee will not lose. Just the last week before result has shown a range of 1838-1690. That means a range of 8.8%. The return obtained after this swing was -5.5%. So this year we got a bigger swing as well as a negative but much bigger return. This year UPA has formed the government and Dr. Manmohan Singh was elected as the Prime Minister.

Let us now check how the markets performed overall in this year before results.

In 2009 the week just before the election result the market was rangebound between 3711-3534. That means it was a swing of 5%. And the previous week before the result has yielded a return of -2.5%. Here we are also seeing that the market has doubled in the 10 years time span from 1999 to 2009. This year once again UPA formed the Government in the leadership of Dr. Manmohan Singh.

After that came the year 2014. All last 3 elections formed a coalition government. Either by NDA or by UPA. But in 2014 there was a Modi wave all over the country. The BJP party took part in the election in the leadership of Mr. Nadendra Modi and formed a majority government.

Now let us check the daily charts to check how the market performed overall till the result in 2014.

Now let us check the overall Nifty performence this year till date. Check the image below for the daily chart of Nifty index.

We have seen that in 1999 the market has not shown any significant correction before the election results. The market has sensed a stability after the term of caretaker government by Shri Atal Behari Vajpayei. On the other hand the charts of 2004 shows no such rally before election. The market was in correction mode till the result and shown plunge after results. This year the so called invincible Vajpayei government has lost to bring UPA1.

The chart of 2009 shows that market was confident about the UPA2 government. We saw powerful rally before results and there was no significant correction. The market shoot up after the results. Similar situation was in 2014 when market was too confident aboud the Modi government. It was a sharp rally without any significant correction. Noe let us copme to this year’s election.

What in the future for 2019? Analysing the Indian stock market during election years, we saw in this 2019 year we saw a sharp rally once the election was declared and started. But as the phases rolled out the market went into correction mode. We saw more than 5% corrections in Nifty index, that shows the market is not yet confident about absolute majority by any single party. It looks like whether its UPA or NDA or the local parties, an alliance government is on the cards.