Home » Blog » Trading » Trading Strategy » How to Trade the Cup and Handle Pattern?

How to Trade the Cup and Handle Pattern? 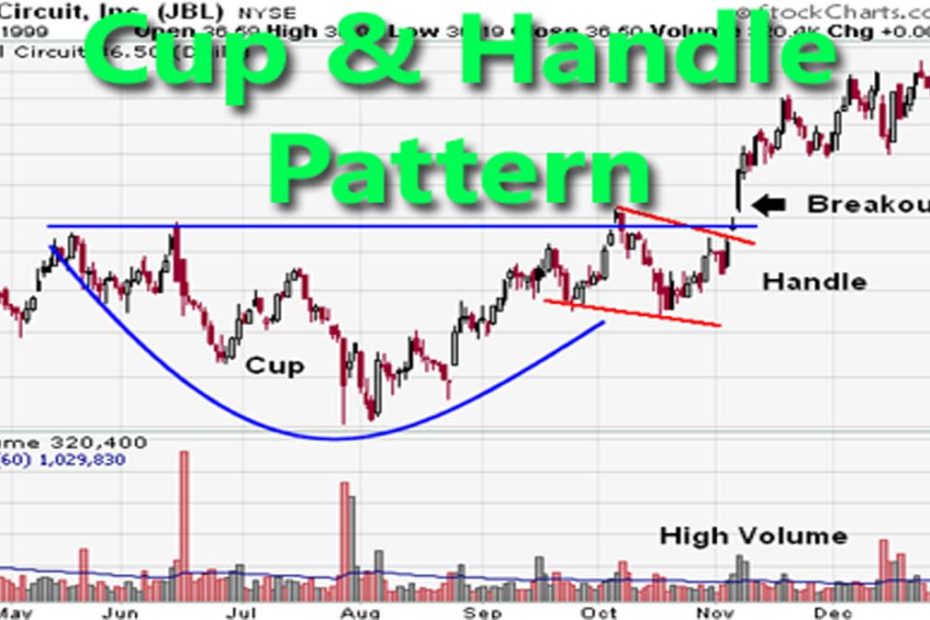 What is the Cup and Handle pattern?

Typically in this pattern, a stock shows a steady uptrend for up to 2 to 4 months. Then it undergoes a market correction. The stock may sell-off into the correction in a downward direction for up to 20% to 35% off the previous swing high. The time frame for this correction is usually anything from 8 to 12 weeks depending on the general market conditions.

Once the correction is over, the stock again tries to recover and tries to retest the previous swing highs. But because in the correction the stock comes so much down from the previous highs, the stock will again incur selling power by the traders who were sitting caught near the last swing high. They saw a loss in their portfolio for so long time and tries to exit their losing position and get rid of the stock. This selling pressure will take the stock value to a small correction in a sideways style. This phase will last for roughly a few days to a few weeks.

In the cup and handle pattern, the corrective trade typically takes place about 5% below the previous swing high. In case the stock is fundamentally weak, there are chances that the stock will fail to recover any further But if the fundamentals are good for the stock it exhibits a breakout from the pattern.

This is the time to buy the stock in the cup and handle pattern. It is because it emerges into new highs on the buying pressure on the euphoria of crossing the previous high that it could not cross in the last 8 to 12 weeks.

Example of the Cup and Handle Pattern

See the image below. This is the weekly chart of the Dhampur Sugar Mills. See the stock was in a consistent downtrend for many weeks. But then the stock has shown a rounding bottom. This has formed the cup. Now once it tried to reach the previous swing high it has undergone some short selling due to the traders locked it at these levels.

Phases of the Cup and Handle Pattern

This pattern is divided into two phases. They are the Cup and the Handle. Let’s check the features of individual phases.

Once the cup is formed, the intermediate uptrend ends and the market shows a halt. This can be a sideways phase too and slowly the market prepares to breakout. This is the handle and if the last swing high gets broken it is a breakout of the Cup and Handle Pattern.

There is an importance of volume in the pattern confirmation. Check the chart below. Sun TV has shown a typical Cup and Handle pattern. We can see a big volume bar indicated the bottom of the market. That is the point where sellers exited and buyers entered. Then we can see steady volume in the handle area showing traders’ interest in the stock and check the big rally after the pattern breakout.

This sell-off has formed the handle. Finally, the stock has seen a breakout from the cup and handle pattern and started a new rally on the weekly charts. You can see it was a massive rally that minted money for the traders.

Targets and Stop Loss of Cup and Handle Pattern

So check how the risk-reward ratio of this pattern is highly favorable. If anyone buys Bajaj Finserve at 8600 they will have 10600 as target and 7850 as stop loss. That 2.5 times reward versus the risk. This makes this pattern also a favorite for the analysts.

Here we are providing you with a PDF guide to trade this Cup and Handle Pattern. This guide is taken from Stocks & Commodities magazine. You can unlock the download link below by using any social share buttons.

I’ve tested that probably the largest stock market winners come from this highly effective cup and handle pattern formation. This is one of the perfect and most dependable patterns to search for. We can identify many good stocks at the beginning of a fresh trend after a deep market correction. Most of these stocks show a tremendous rally after the breakout of this pattern.